James Watrous’ Paul Bunyan Murals is comprised of a series of painted panels illustrating the American folklore hero Paul Bunyan. Conceived as a giant lumberjack, the figures of Paul Bunyan originated from the forests of the Upper Midwest and served as a symbol of frontiersman vitality and strength. By the time Watrous began the murals in 1933, stories associated with Paul Bunyan and his giant blue ox Babe were widely circulated.

Watrous applied and receive funding, $25 per week, for the murals from the Public Works of Art Project (PWAP), one of Franklin D. Roosevelt’s New Deal programs that supported visual artists during the Great Depression. When the PWAP program was terminated less than a year after its inception, the panels were only partially completed. Over the course of the following two years, Watrous volunteered his spare time to complete the project.

Utilizing American subject matter, Watrous’ murals were meant to enhance its public setting and appeal to broad audiences. In its depiction of resilience and hard work, the Paul Bunyan Murals capture the spirit of its period and connect to other PWAP commissioned artworks across the country.

In 1993, Watrous agreed to create a new painting for the Paul Bunyan Murals to replace a panel that, while considered “acceptable” during the 1930s and taken from earlier Bunyan myth texts, was deemed racially insensitive. Although no longer on display, the original panel was retained for historical and future art history research purposes.

James Watrous was associated with the University of Wisconsin-Madison for nearly seventy years. After receiving his BA, MA, and PhD at the university, he became a professor of art and art history. He was a vigorous advocate for the arts and collections stewardship. Watrous was the driving force behind the fund-raising, planning, and construction of the university’s Elvehjem Art Center, now the Chazen Museum of Art. He is also the namesake of the James Watrous Gallery at the Overture Center for the Arts in Madison. As an artist, he is best known for his large-scale murals and mosaics. Watrous posthumously received a Wisconsin Visual Lifetime Achievement Award and continues to be remembered through the several art installations on UW-Madison’s campus.

mp The Paul Bunyan Murals are located in the Bunyan Room on the first floor of Memorial Union at 800 Langdon Street. The murals were in storage during Union renovations and re-mounted in their original locations in October 2018. 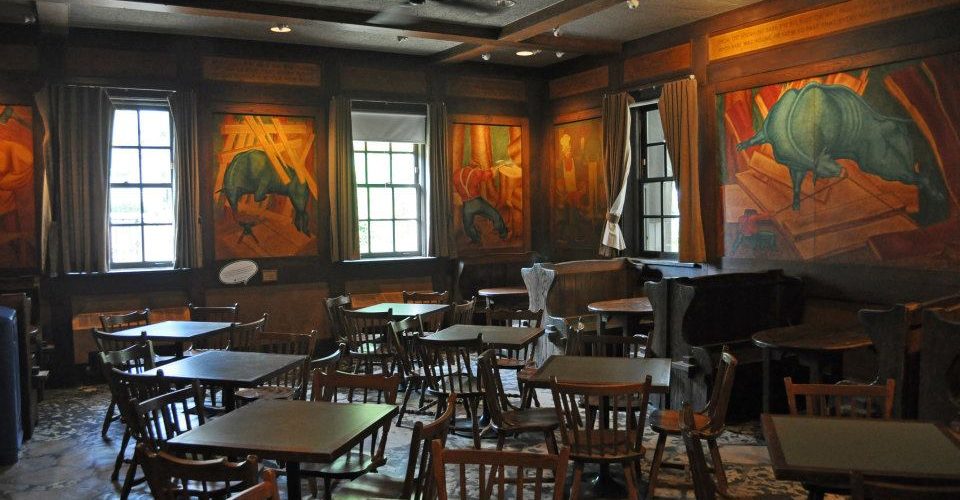